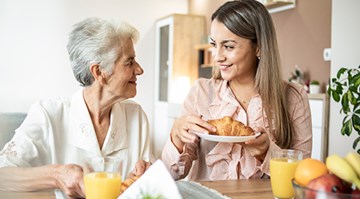 The Centers for Disease Control and Prevention (CDC) reported in 2020 that 5.8 million Americans were living with Alzheimer’s disease. November is Alzheimer’s Awareness Month, which makes it a good time to learn about Alzheimer’s.

Knowing the risk factors, who it affects the most, what it is and more can help you learn how to fight Alzheimer’s. It can also help you support those who are living with it.

More information about Alzheimer’s disease can be found on the CDC’s website, including ways to keep your brain healthy and resources for friends and family members who are serving as caregivers for those affected by Alzheimer’s.

What is Alzheimer’s disease?

According to the CDC, Alzheimer’s is the most common form of dementia. It becomes more common and noticeable as people age. It may start with mild memory loss and lead to difficulty holding conversations or responding to people or events around you. Alzheimer’s typically affects the parts of the brain dealing with thought, memory and language. It can also hinder a person’s ability to complete daily activities

What are the risk factors and warning signs for Alzheimer’s disease?

While age is the most commonly known risk factor, there are other factors, too. Genetics and your family’s history with Alzheimer’s can be a good indicator of your risk. Research is being done to determine if diet, education or environment can play a role in the disease’s development. However, there are a couple of long-term studies that suggest physical activity, nutritious diets, consuming limited amounts of alcohol and refraining from smoking can help reduce the risk for Alzheimer’s.

Alzheimer’s symptoms can be hard to identify and may also be signs of different conditions. These can include the following:

Who is typically affected by Alzheimer’s disease?

Alzheimer’s symptoms start appearing around age 60. The likelihood of developing the disease increases with age. The CDC reports that the number of people living with Alzheimer’s doubles every five years over the age of 65. Alzheimer’s can afflict those who are younger than 60, although those cases are less common.

How can I support someone who has Alzheimer’s disease?

Choosing to care for someone who is living with Alzheimer’s is no walk in the park. Although it does have positive benefits. Caregiving can improve family relationships and provide a sense of fulfillment and satisfaction. It also allows both parties to develop new skills. The task can be an overwhelming, though. So it’s important to weigh that against your priorities before making a final decision. For those feeling overwhelmed as caregivers, the CDC has suggestions for taking care of yourself while taking care of a loved one here.

Use 988 to Connect to the National Suicide Prevention Lifeline

Can Your Gut Health Affect Your Heart?

What You Don’t Know About Skin Cancer Can Hurt You